The Rebirth campaign released a tiny bit of lore associated with each poster, describing events that happened in the past, that shaped the universe as it is today.

See below for an overview of the lore associated with each poster.

"The rogue planet, Iris, dense with invaluable materials, draws in and collides with seven child planets in a remote region of space, creating what is henceforth referred to as “The Cataclysm”. When combined, these eight elements create a form of free energy. The collision creates a massively valuable debris field." 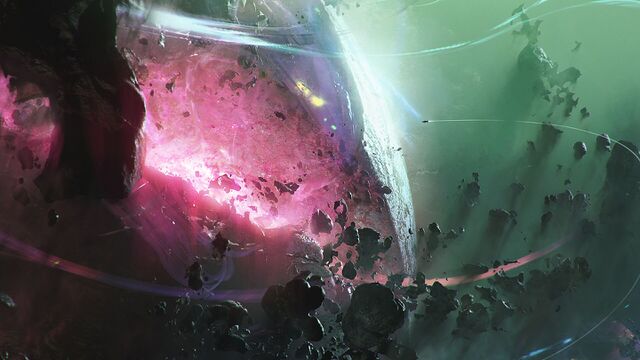 "At the core of Star Atlas lies a treasure trove of priceless data. After an unsuspecting deep space explorer discovers “The Cataclysm”, he scans its riches, creating what will once be known as the first intergalactic data block. He sells this invaluable information to all three rival factions, igniting a lethal spark that forever changes the course of history." 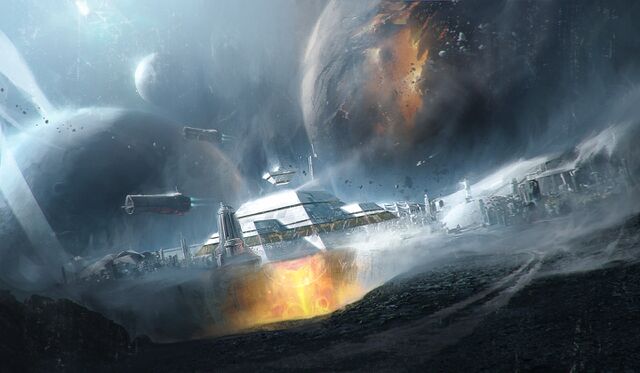 "All three factions, thinking they were the sole owners of the cataclysmic data drop, converge to settle the area. A devastating war breaks out across the galaxy after their inability to settle the disputed territory." 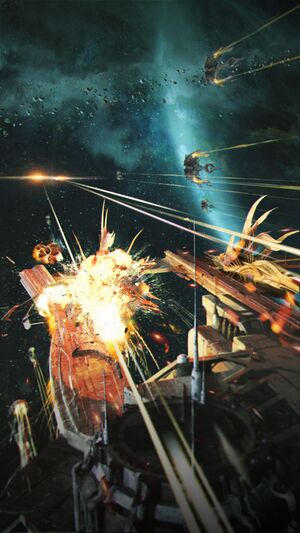 "He thought it would be just another routine exploration mission. Get there, scan, save data blocks and return. But when a surprise radiation storm knocked out his spaceship and swept him up into its high-velocity current, the only thing that saved him from certain doom was his custom ion shield." 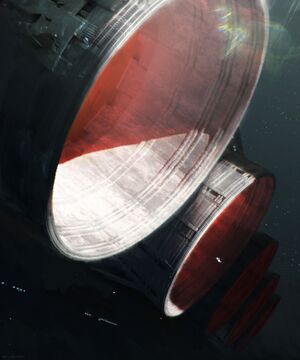 "Paizul, the charismatic and brilliant leader of the ONI consortium, vividly recalls the first time she saw her one true love. It was a warm summer day, full of raging ionic storms. Lightning was piercing the sky as Bekalu took off his helmet and locked eyes with her. “What are the chances of nearly colliding with someone flying through these wastelands on a day like this”, he smiled with his booming voice. “Perhaps it’s destiny,” she smiled back mysteriously. There was another strike of lightning, but this time the sky remained calm." 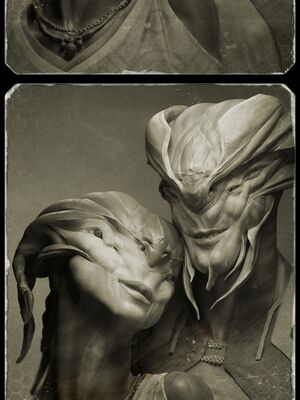 The Assassination of Paizul (#6)[edit source]

"Suffering one of the cruelest fates in the universe, the Sogmian race of aliens was driven to the brink of extinction. With only 10,000 members left, they put all hope of salvation in the hands of their leader Paizul. After she was assassinated in a gruesome public way, so much fear was struck in the hearts of survivors that they set out to build their “Last Stand”." 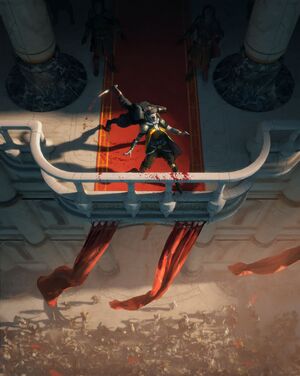 "The sound of wailing echoes across the plains. The Sogmian procession solemnly marches in step past their ancestors’ gravestones, still haunted by the fate of their leader. The sun begins to set as they bring Paizul’s cryopod at the top of the Rock of Light. As a beam of light consumes the pod to upload it to eternal rest with the ancients, Bekalu falls to his knees with a wrathful howl. The crowd is rattled to the core, a foreboding of things to come." 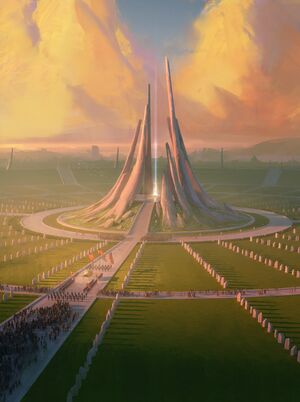 "Humankind is visited by Ahr, a mysterious being of pure light. But not all is as it seems… For through the power of illusion, we are tricked into forming a space-based religion, plundering the planet and launching ourselves towards the stars, permanently leaving the Earth." 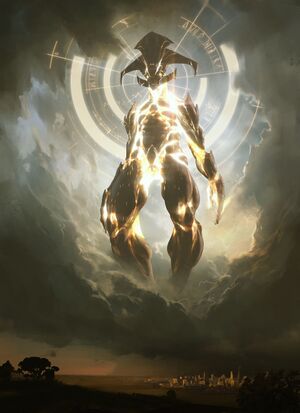 "Their Titan class warship served as a fortified city to protect them. Built in retaliation for the decimation of their species and the slaying of their leader, the Sogmian behemoth was a galactic alpha predator. This weapon of war was so intimidating it caused the other factions to encourage peace talks." 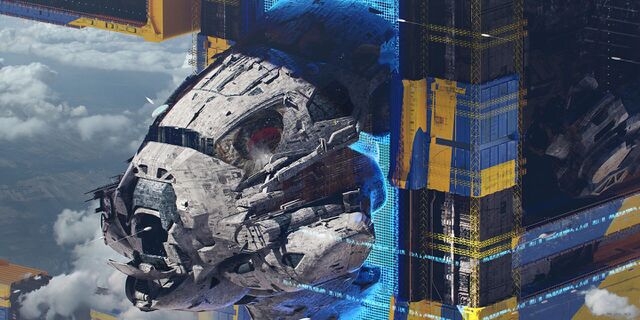 The Signing of the Peace Treaty (#10)[edit source]

"All three faction leaders sign the Treaty of Peace and establish the galactic Council of Peace (COP). The treaty establishes the open sharing of all scanned data of space on a light-speed intergalactic blockchain. The data includes fleet movements, installations and resource discoveries. An era of peaceful trading is ushered in and the economies of all factions boom simultaneously." 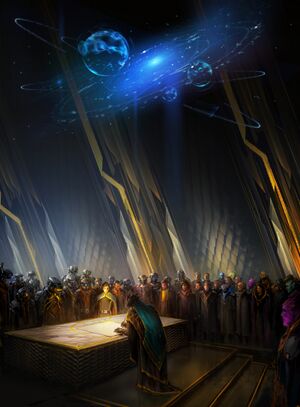 Main article: Rebirth: The Signing of the Peace Treaty

"At dawn they laid their souls to rest,

Ships and shields were shattered. Worlds were torn asunder. Yet in their darkest hour Their cry of peace triumphed over thunder.

-To Honorable Leaders Armi.eldr, Bekalu and Charon, signatories of the Galactic Peace Treaty. Passed away on the day of the fiftieth anniversary of the treaty’s signing." 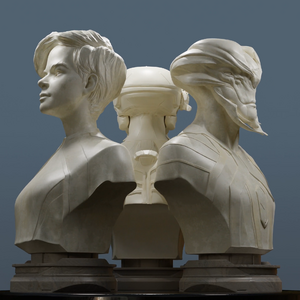 "The Ustur are a race of androids spawned by an advanced, multi-generational AI who sought to express themself through physicalized form. They are mechanical beings with a developed sense of identity, culture and fashion. Their anatomy articulates in a relatable way to organic substrate beings to convey demeanor and to emote. They enjoy establishing bonds with all intelligent life and satisfying higher spiritual exploration." 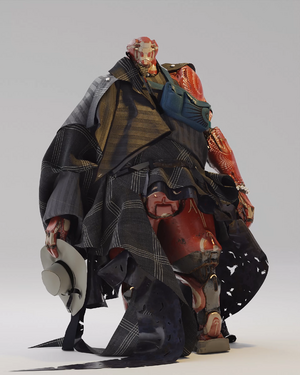 "The Photoli race are highly advanced aliens of light. Their natural state is navigating the universe in the form of light energy. Their ability to maintain a corporeal form with amorphous anatomical shapes and halos conveys expressions to other species. During galactic explorations, they are known to be confused with deities by more primitive civilizations. One Photoli rogue scout in particular played a pivotal role in advancing humankind to the stars." 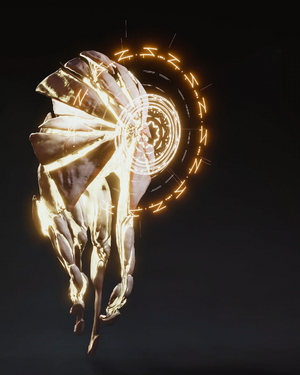 “The first to arrive at the universe’s next frontier is the first to knock on the gates of prosperity.” — Ustur Armi.eldr 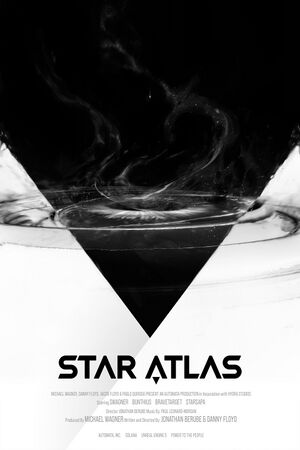 Main article: Rebirth: Star Atlas
Retrieved from "https://staratlaswiki.org/w/index.php?title=Rebirth_Lore&oldid=1464"
Cookies help us deliver our services. By using our services, you agree to our use of cookies.