The release of this poster was done in collaboration with the United States Space Force, honoring Neil Armstrong Satellite launch on June 17 by SpaceX.[2]

The official description that belongs to this piece of art is as follows:

When humans were racing to expand into outer space under Ahr’s influence, the devastation they inflicted upon the planet was so great that it weakened the Earth’s geomagnetic field. The reckless way the planet’s orbit was populated by machines and debris led to distortions in the gravity field. All this culminated in a disastrous slingshot effect for the many satellites orbiting the blue dot, altering their trajectories to loosen the direct gravity pull of the planet and scatter into deep space. Some of these satellites contained valuable data that was lost forever. In 2621, the Council of Peace put a bounty on these ancient artifacts to integrate them into Star Atlas, leading to a hunt for them across the galaxy. One of the most sought-after satellites in history records bears the name of Neil Armstrong, the first human to set foot on the Moon. Initially launched into medium Earth orbit as a cornerstone of the global positioning system (GPS), the satellite had untold additional capabilities that made it more and more valuable as it drifted off into the void.
— Star Atlas - Armstrong Forever[3]

Artist Max Schiller, who is credited with the creation of the art, also posted on his ArtStation page a sketch of the story of the satellite.[2] 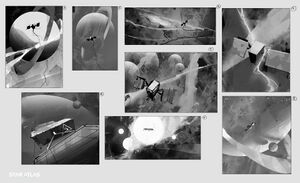 Retrieved from "https://staratlaswiki.org/w/index.php?title=Armstrong_Forever&oldid=2049"
Category:
Cookies help us deliver our services. By using our services, you agree to our use of cookies.